Alternative band The Mountain Goats performed in NYC as part of SummerStage’s concert series. The crowd was packed the East River’s River Amphitheater to see the band perform their classic hits, as well as songs from the band’s most recent release: ‘In League With Dragons’. 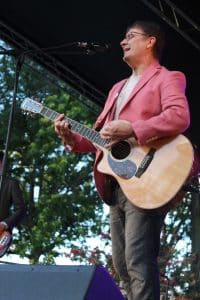 Not even four months after the album’s release, it has already received critical praise from the band’s’ loyal following. Lead singer and songwriter, John Darnielle, explorers songwriting through from the vantage point of rockstars, wizards, and athletes who offer an escape from reality. In League With Dragons pulls influences from the popular table-top role-playing game Dungeons and Dragons.

One of the songs on the album, “Doc Gooden,” is told from the vantage point of famed Mets pitcher, Doc Gooden, recounting his glory days. Another song that highlights the fall from grace is “Passiac 1975”. Written from the point of view of Darnille’s personal idle Ozzy Osbourne, its lyrics are about Osbourne’’s darkest moments of drug addiction:  “In a Holiday Inn by a nameless river/ Renew the assault on my lungs and liver.”

The band brought an incredible about of energy to the show. John Darnielle’s famous dark sense of humor shone through, making jokes between songs about aging, divorce, and impostor syndrome. He jokingly said that he wasn’t sure how many people would be in attendance after the first two songs, as SummerStage is a free concert series. However, the dedicated fans filled the theater for the entire show,  with many more camping on the grass and standing room. 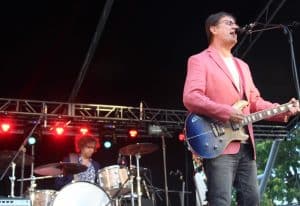 The band finished the concert by playing some fan favorite singles; including “No Children.” The show concluded with “This Year,” with the entire crowd singing along. The Mountain Goats put on an incredible show and will undoubtedly be the highlight of the SummerStage Concert Series.

What Happens When Your Mario Character Takes Too Many Mushrooms