Normally when somebody shoots me just a link to a music video I’ll check it out, but unless it’s got the infamous ‘it’ factor, I’ll probably move on with my day. Being sent the video for “Movado” by Migs718, was one of those moments when I had to pause my entire day just to digest this cinematic display of a banger of a track. Needless to say, a few messages later and an interview was scheduled. 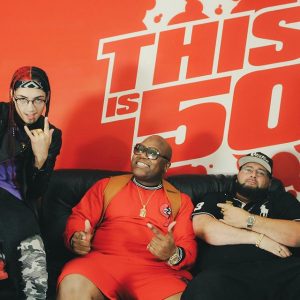 In an industry that tends to run a few hours late, Migs was ready with his entire team on time, hungry to knock out a massive interview right after his interview done with 50 Cent’s platform, Thisis50. In the midst of setting up we were able to spend a good bit of time breaking the ice and getting to know everyone better. We came to know that Migs’ manager, @mikeloco (who also happens to be Migs’ real birth father), was the youngest ever A&R for Def Jam records when he was a mere 17 years of age. These days Mike no longer works under Def Jam but continues to do A&R work. Whereas Migs, despite being relatively fresh into his music career, has been heavily involved in a variety of other creative outlets since his youth and refers to himself as more an “entertainer” than anything else.

Migs grew up wearing Designer (Balenciaga) fits and developing an eclectic taste from the likes of Wu Tang Clan to Slipknot and beyond. Being exposed to some of the greats in music at a young age while being surrounded by modern day influences, Migs delivers relatable tracks laced with true poetry and rhythm. Watch the promising creative dive deep into his life and the process behind it all in the full interview down below:

Pop Evil shows that fear will not lead their way!

Breezy Supreme on Getting Stabbed, Being Held at Gunpoint, Burning the Bible + Ball Busting Fetish