Saturday night, Pop Evil took the stage at Mohegan Sun’s Wolf Den in [town], Connecticut. Surrounded by the bright lights of the famous casino floor, Pop Evil had sold every seat, including standing room. Their performance comes at the heels of their fifth studio album, titled Pop Evil.

The self-titled album came out last year, containing fan hits like “Waking Lions” and “Be Legendary.” It is a slightly heavier tone than their previous work, such as their 2015 album Up, and reminiscent of their 2013 album Onyx, which was recorded following the death of their lead singer’s father.

“Fear will never lead my way,” a line from their song “Waking Lions” was featured prominently in their tour promotions.

Although it is not a live album, their songs have elements ideal for performances. For example, the chorus of “Be Legendary” is practically meant to be sung by an audience–which, of course, is what happened at the Wolf Den.

The band started their set with a cover of “Let the Bodies Hit the Floor” by Drowning Pool to warm up the audience. The show was attended by groups of friends, many of them in their 40s, who did not let their age dampen their enthusiasm. The band’s energy was infectious, with lead singer Leigh Kakaty encouraged by interacting with the audience between songs.

The band’s hit songs “Take It All,” “When We Were Young,” “Be Legendary,” and “Footsteps,” were played. During “Torn to Pieces,” the audience help up their cell phones and swayed them in time to the music.

When the performance was over, the band prepared to walk out. Leigh Kakaty returned for an encore, which was intended to be only two songs, but turned into four. The band ended with “Trenches,” a fan favorite from their Onyx album. The standing room section was especially energetic, ending the show on a high note. The mood infected the entire casino. 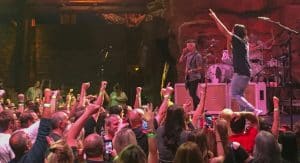 Overall, the Mohegan Sun performance surpassed the live shows that made Pop Evil so popular. The band announced that they are getting ready to create another studio album, which should assure fans that their favorite music group will soon be on another tour.

Migs718 on Working with 50 Cent's Platform, Getting Action From Beyoncé & Lady Gaga + More